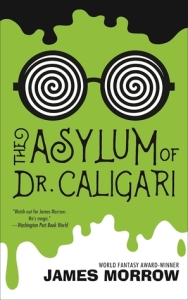 The Asylum of Dr. Caligari

The Asylum of Dr. Caligari by James Morrow is a brief look into the the human psyche featuring an American painter, a Spider Queen, an AWOL soldier, and one, war-minded doctor. The story takes place in Germany during the first year of World War I. The main character, Francis Wyndham, is a young painter from Pennsylvania who leaves the country in hopes of becoming Picasso’s apprentice. But when that deal falls down the drain, he is offered a position as an art therapist at Träumenchen Asylum. There he meets quite the gang of people, all of whom become necessary in the fight against Dr. Caligari, who has painted a masterpiece with the power to turn the most pacifist soldier into a war-hungry man.

If you think the title of this book sounds familiar, that’s because you might know its precedent, The Cabinet of Dr. Caligari. Morrow borrows from both the production and the plot of this 1920s German film in this novela, artfully creating an ode to the film and the German Expressionist cinema it represents. Don’t worry, you won’t have to watch this movie to understand the book. The two have been pretty clearly separated as two entities. But, if you’re interested in watching what is considered “the first horror movie,” The Cabinet of Dr. Caligari is definitely worth the watch.

That being said, I did have some difficulty reading this novel. The language used is very early 1900s-esque. And while there’s nothing inherently wrong with this,—if anything it says more about Morrow’s skill as a writer—the prose is scattered with a lot of German words and phrases, much of which refers directly to places and events that occurred in Germany during World War I. If you aren’t familiar with the area or culture, a lot of these words can just fly over your head.

One of my main issues with this novel was the relationship between the two main characters, Francis Wyndham and Ilona Wessels. Ilona is a patient at Träumenchen Asylum who believes that she is the Spider Queen of Ogygia and percieves herself to have eight eyes, eight legs, and pincers. And yet, despite warnings from hospital staff to remember that the people at Träumenchen are patients, Wyndham still pursues a sexual relationship with Ilona. At one point in the novel, the two have very a descriptive sexual encounter that involves Ilona ripping out a tampon. Later in the story, Dr. Caligari prescribes Ilona sex to treat her delusions. And while this was a historically accurate treatment for some women of the time, the whole relationship felt forced and made me uncomfortable.

In the end, The Asylum of Dr. Caligari, is a thought-provoking novel about humanity in the time of war. While very historically accurate, the novel falls short in keeping its readers engaged throughout pages of long, heavy paragraphs. I would only attempt this book if you’re interested in a dry World War I story.